The Rocklin City Council has agreed to spend $2.6 million on the various design elements of the park, including zip lines, a rope course and climbing activities along quarry rock faces. Other elements of the adventure park, which will be located at 4060 Rocklin Road, will include an observation deck, history exhibits, jump wall, vertical garden, rappelling stations, swinging bridges, water features and more.

The company the city of Rocklin tapped to design and construct the adrenaline-rushing features is Bonsai Design, which has done projects for Heavenly Mountain Resort, Jackson Hole Mountain Resort, the Toledo Zoo and more. The company says it’s responsible for more than 1 million exciting experiences through its unique and exciting adventure-seeker programs.

Bonsai expects the construction elements to be completed by February 2018.

Here are some renderings of the project: 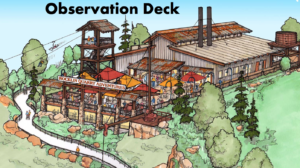 City officials said the project, which will allow visitors to zip line down a seven-story abandoned quarry or rock climb down its cliff at a historic site in Rocklin, has the potential to be a catalyst for business and development in the Quarry District and hopes to attract customers to local business to increase local tax revenue.

Other park structures, including the ticket office, food offerings, tap house and more will be designed by another company. The Rocklin City Council approved an agreement in January, with Legacy Family Adventures to design about 30 percent of the park.

For more information, visit the city of Rocklin’s website.